OK, this box is awesome. It was my go to unit (borrowed unfortunately) for a whole month of tracking on one project recently. I had a reasonable selection of gear, but the compressor and eq were the winners pretty much every time. The first thing I have to mention is FLEXIBILITY, just to be able to patch into and out of any section is fantastically handy. The non-detented impedence sweeping on the mic preamp really helped with several of the ribbon mics I was using and, my original worry that 40db gain may not have been enough was immediately swept away. [The mic pre actually has up to 65dB gain, plus another 10db if you use the Main out]

If you are worrying about the colossal amount of circuitry the signal must pass through, don't, this thing is QUIET!! I particularly loved the tranny option on the output stage, the obvious thickening effect that was controllable in intensity by the gain into the output stage is a great great feature.

While there has been mention of the lack of dedicated bypass switching for the eq and comp sections being a problem, in practice (and I used this unit in MANY MANY configurations) I did not find this to be an issue at all. A small but pertinant point was that I found the toggle switches used for switching different states throughout the ARC very clear and perhaps less confusing than many leds would have been in low-light situations. 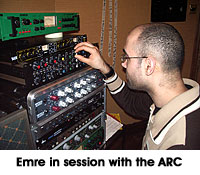 The eq is very flexible and really pretty fully featured. The high pass filter saw alot of usage, and I found it to have a very satisying smoothness. The high shelf is switchable between tight and broad shelving, the tight setting really accentuating the airy highs of your material. The low shelf I found to be surprisingly punchy on both the 60Hz and 120Hz freq settings. I hate to return to the same word all the time, but flexibility was my buzz-word (groan) for the parametric section of the eq. The large areas of crossover between the two bands and the wide variance in q-width is enormously helpful in rapidly flicking between accurate carving and more broad tone changes. Let alone that each stage of the eq can be assigned to the sidechain of the comp section.

The compressor was particularly wonderful on the few bass sources I tracked during the session, as well as the lead singers vox and every acoustic guitar it touched. The auto mode on both attack and release was really good on the acoustic guitars, wherease I played a little more with the attack and release settings on the vocals with a ratio of 5:1 (I ended up using mainly slow attack). I found the compressor to be very good for just subtle gain reduction if I didn't cane it, but I wouldn't say the compressor is universally transparent, it can be allowed to have a wonderful thickening effect on the sound (very handy having it switchable pre and post eq too) and you can get it to pump if ya want. It was however satisfyingly musical in all the applications I put it to.

The peak metering leds were absolutely fine and it seemed that the red overload led was always active even when the main meters were switched out, or just the comp section was switched to an external source for example (quite useful for a quick flick of the eyes over the rack). I have no hesitation in recommending this unit, a world-class product!
[London, March 2005. Visit Emre's website]